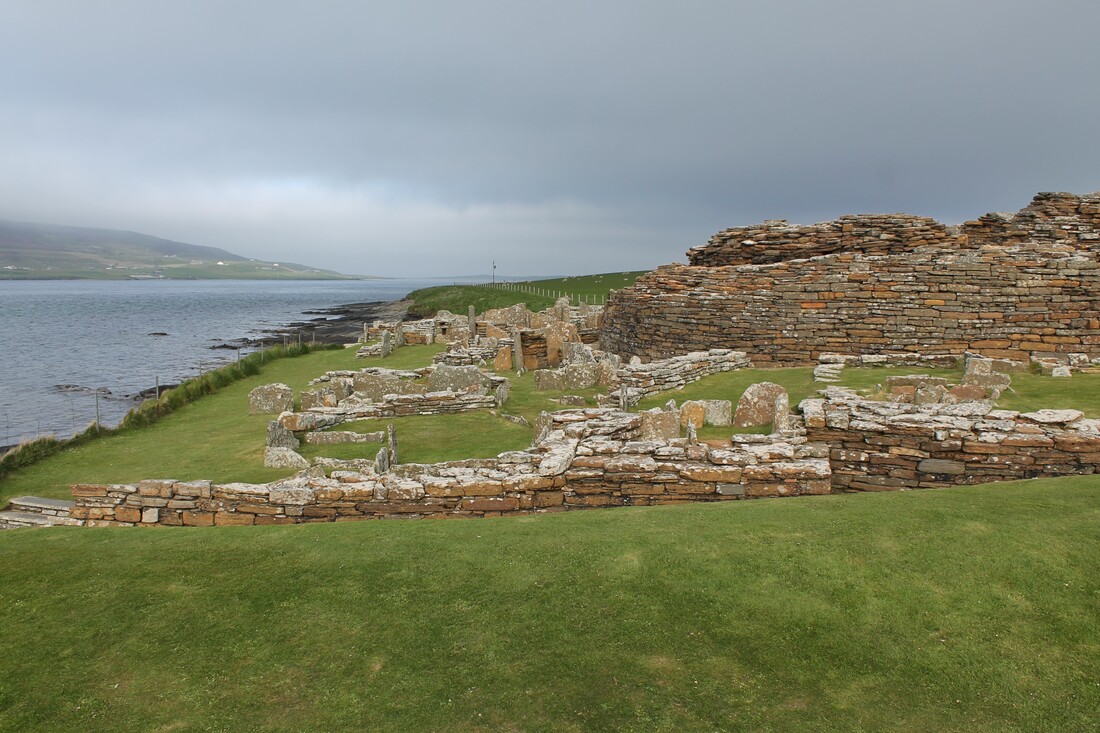 "The rain came on dark wings, lashing against the gallery window, throwing Caris’s reflection back at her in fractured portraits scattered among the tapestries and carvings. She stepped inside and the deep history of the Viking north engulfed her. Norse dragons and swords, Pictish spirals, ogham rings, Celtic knots, silver, gold, stone and wood – evidence of the days when Orkney was the north’s great crossroad, Britain’s first and most ancient capital."
​
The Gods of Thought and Memory

An important source for understanding the history of Norse Earldom of Orkney lies in the Icelandic sagas.
Of these, the Orkneyinga saga is one of the most famous and certainly the most specific to Orkney.
Compiled sometime between 1192 and 1206 by an unknown Icelandic scribe, or scribes, the Orkneyinga Saga presents an interpretation of the first conquest of Orkney by Norway and the subsequent history of the Earldom.
Within its pages, the reader is drawn into the semi-legendary world of Earldom Orkney.
The saga is thought to have been compiled, over the years, from a number of sources, combining oral tradition, artistic licence and historical fact.
It paints a vivid picture of battles, murders, sorcery, political intrigue and dirty dealings - all events occurring at places that have changed little over the centuries and remain familiar to Orcadians today.
After three chapters dealing with the mythical ancestry of the later earls, the saga's adventurous account begins with the semi-mythical tales of the conquest of Orkney by Harold Fairhair, the King of Norway.
This event, says the saga, resulted in the founding of the Orkney Earldom, which it then goes on to document.
Within its pages, we are introduced to some of the most powerful figures of Viking Britain - Sigurd the Mighty, the first Earl of Orkney; Haakon Paulsson, Svein Asleifarson, Sigurd the Stout, Earl Rognvald and in particular the beloved Earl Magnus the Martyr, the saint still revered throughout Orkney today.
All these characters remain firmly in the minds of Orcadians to this day and form the backbone of the county's Viking heritage.

**The History of the Orkney Islands

"The Orkney Imagination is haunted by time"   George Mackay Brown

The Orkney Islands have a long and colourful history. It is no exaggeration to say that the isles are a place where this history remains a part of everyday life. Every corner of the islands has its ancient monuments, most of them in a remarkable state of repair. For thousands of years, people have lived and worked in Orkney. From the stone age Orcadians, who left a legacy of monuments that continue to inspire today, through to the Vikings, who took the islands in the ninth century and made them the centre of a powerful Earldom and part of the kingdom of Norway, and beyond.
The Orkney islands are covered with monuments that stand as constant reminders of the events and people that have gone before.
Houses and tombs dating back 5,000 years share the landscape with Bronze Age cemeteries, standing stones, 2,000 year old brochs, viking ruins, medieval churches and Renaissance palaces.

Our history is therefore not something that exists only in schoolbooks, or in the thoughts of academics. Orkney's history and heritage is everywhere - an intricate tapestry of events stitched into the very fabric of the islands themselves. Orcadians have a connection with this history - events that were witnessed by their ancestors many generations ago. The past is alive and remains part of everyday life, albeit unconsciously.

** From Orkneyjar,  the heritage of the Orkney Islands        www.orkneyjar.com/history/saga
Orkneyjar is a website dedicated to the preserving, exploring and documenting the ancient history, folklore and traditions of Orkney - a group of              islands lying off the northern tip of Scotland. Orkneyjar is a privately-run, non-profit website, created and maintained by Orcadian, Sigurd Towrie.